Facial recognition technology is currently being trialed at 18 airports across the US, and by 2021 will be in use for 100% of international travelers at the top 20 U.S. airports.

Furthermore, a rollout plan is in place for this technology to soon become ubiquitous at 97% of airports by 2023. This will quickly become the new normal.

A new survey conducted by travel search engine Reservations.com found that public opinion was mixed on the acceptance of facial recognition technology.

The results were as follows:

We ran this study to get a real sense of what the sentiment is out there for this rapidly evolving technology, as we want to understand what’s top of mind for travelers while planning future vacations. Facial recognition technology expanding to 97% of airports may have an impact on security-conscious citizens.

These numbers represent a shifting in public opinion since late 2018. An October 2018 Brookings survey found just 31% favorable to using the technology in airports to establish identity, and 44% had an unfavorable view.

More recently, a December 2018 survey conducted by the Center for Data Innovation found 54% of respondents were opposed to the government strictly limiting facial recognition technology even if it improves airport security lines.

Digging into the demographics, the survey found that men were more likely to have stronger opinions, with men representing 53% of those who strongly disagree with the use of the technology, while only representing 48% of those polled.

Those in the 25-34 age range, representing Millennials, were the most against the technology, with 25% of the strongly disagree responses coming from this group.

Split sentiment on the technology

But the technology is not without its controversy. While the CBP and DHS cite a 98% match rate, the accuracy plummets for minorities. A 2018 test by the ACLU found the technology incorrectly matched 28 members of Congress and identified them as people who had committed crimes.

Additionally, CBP skipped the public feedback portion of the typical rule-making process that applies before adopting technology that would be widely used on civilians.

There are ways to opt-out, as reported by Newsweek “the current Biometric Entry-Exit program gives U.S. citizens the ability to opt out of having their image collected at the airport.”

Nevertheless, the expansion seems inevitable, with the rollout coming to most airports in the coming years.

So how does the technology actually work? 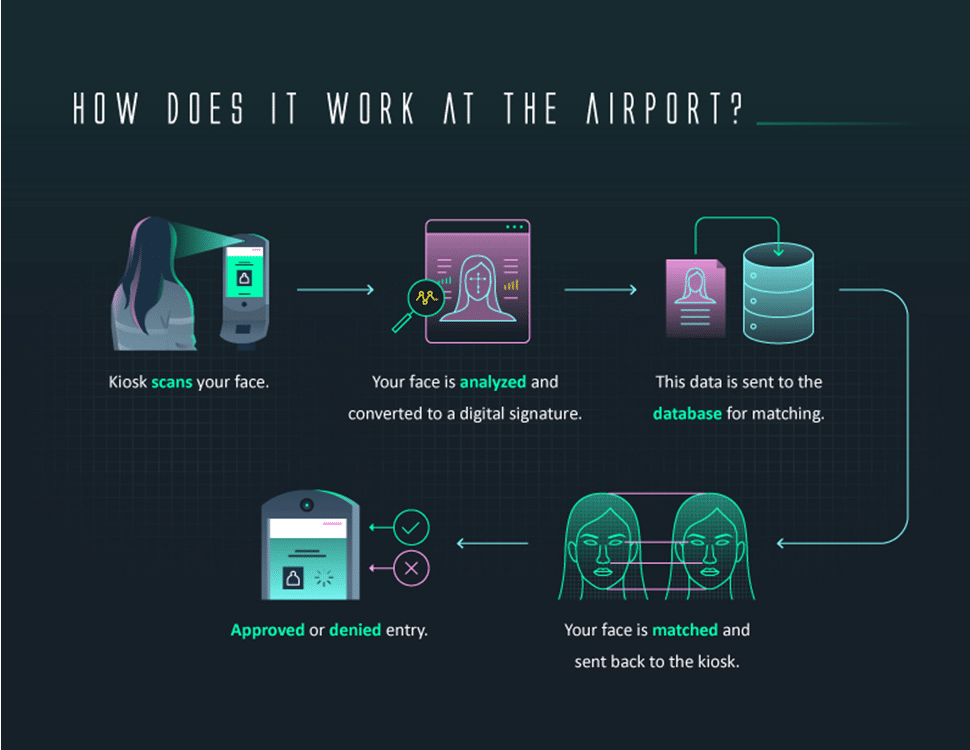 At the security checkpoint your faces is scanned and sent for processing to the database controlled by the U.S. Customs and Border Protection. They instantaneously match your face against their database, from passport photos, visas, and other travel documents with 99% accuracy. If approved, you’re sent on your way. The matching services is called Traveler Verification Service (TVS). The CBP does note in their FAQs that citizens do have the right to opt out.

In our research on the topic, we’ve found that the technology is becoming more and more accurate, with rapid improvements in quality over time. In fact, a report from the NIST found a 20-fold improvement in the technology between 2014 and 2018. With increased accuracy, we can expect to see fewer errors in matching minorities, which have raised concerns.

We believe that the technology is here to stay, and it’s up to citizens, businesses, and government agencies to properly roll out the usage for the benefit for all.